Subscribe to my newsletter and never miss my upcoming articles

VC (Version Control) in day-to-day life, especially within teams, is a core skill, without it, the whole startup/company may fall down due to 1 small merge issue, and being an excellent VC user is something that instantly makes you more valuable than your peers who don't.

If you ever talk to a great programmer, you'll find they know their tools like an artist knows their paintbrushes.

Review the new script and ship it!

Where to go from here?

The team workflow presented here is based on Vincent Driessen's article

that introduced the "Git flow" pattern, which is now a best practice used by software engineering teams around the world.

here several times. You should follow this process on real team projects.

Over time, this will make your team more productive while working in parallel.

This image shows the entire process described in the instructions below.

The process likely appears complex at first, but you'll do each step below

one at a time. As you practice this process with teams, you will master it! For this lesson you will work alone, but imagine you are working

with a group of other developers. Imagine each commit along

the way as being added by a different member of your group.

To start this exercise, set up your repo and code editor:

then carefully follow the instructions below step by step.

You are working on the script for a new movie, "The Unicorn King".

You need to fix typos (bugs) in the script, add new characters (features),

resolve merge conflicts and publish (push) the script along the way.

While working on a team, you will create branches to manage team workflow:

You need to have an always working published Production version.

Your team will be continually iterating on the Development version.

incorporated into the Development version.

at any time, so you need to be able to fix and publish (push) Hot Fixes

quickly without introducing recent changes from the Development version

that are not ready to be published (tested for Production).

to incorporate changes from several different lines of Development.

to make small changes to the Development version.

It's important that the changes to this branch are

not visible until they are considered ready to be published.

Your goal: Create a new develop branch and rename the character.

This will be the Development version. (product) that has already been published to movie executives (users).

Since you don't want them to see the young boy George's new name just yet,

it's important to fix the typos in the Production version (master branch).

This is a Hot Fix, so you'll need to create a new branch off of master.

Check the current version of the project for typos. These new changes should be incorporated into the Development version. Your team will be creating New Features frequently. On larger

the new feature is fully functioning, which may take a long time.

The producers have suggested that adding a zookeeper to the story

would be a good idea. They may change their minds in the future.

Probably best to keep this in a new feature branch.

Create a new zookeeper branch where you can incorporate the zookeeper. 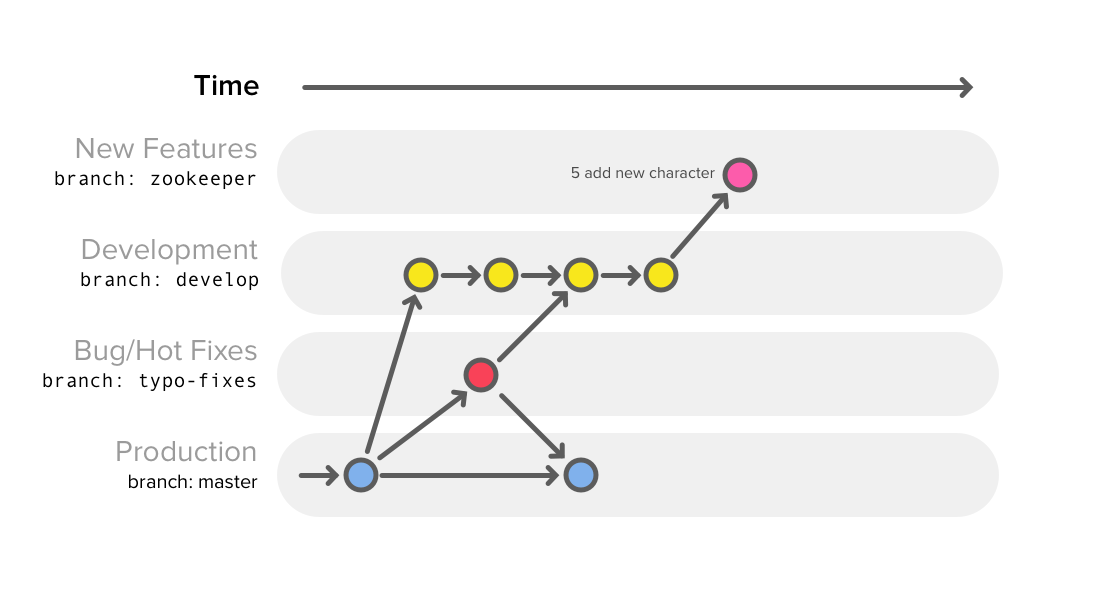 and reviews will be critical. You'll need to improve the story's ending.

The current ending is already part of the story (product), so your team is

improving something that has already been written (implemented). Therefore,

this work should be done on the Development version (develop branch). The new character ideas were approved! Be sure to proof read them

before merging them with main story in the Development version. Review the new script and ship it!

When releasing a new version of a product, you'll merge the latest Development version (develop branch) into the Production version (master branch). Excellent work! Now you know how to manage a coherent and organized workflow on collaborative team projects with a shared Git repository.

Where to go from here?